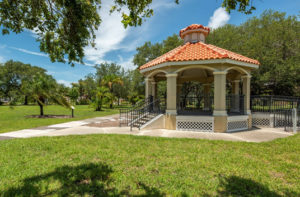 A Green space is defined as “community space consisting of land (such as parks) rather than buildings.”  It is also referred to as an open space reserve, protected areas of undeveloped landscape and the natural environment.  Are you aware that parks, recreation and natural areas have always been integral to the City of Venice’s image and appeal?  The layout and design of the City by John Nolen in the early 1920’s included a balance between two primary ideals – “the promotion of civic virtue through the harmonizing effect of urban planning and the humanizing influence of the beauty of nature.”

This balance was made possible in part by allowing nature and beauty to infiltrate into the City from surrounding natural areas through an interconnected park system comprised of streets, linear parks, greenways, parks and open spaces designed to meet the every-day social and recreational needs of residents.  It was based on the idea of providing for 1920’s modern, everyday life conveniences integrated with City Garden Era idealistic design principles.  A student of the City Beautiful Movement of the early 1900’s, Mr. Nolen believed that creating a beautiful, well designed public realm was integral to creating a high quality of life and higher level of civilization.

The General Plan was designed for gradual implementation.  It included a strong street and urban design framework, public facilities, commercial uses, industrial uses, open spaces and parks and a variety of opportunities for housing.  Architecture was intended to be designed in the “Northern Italian” or “Mediterranean Revival” architectural style.

The streets, open spaces and parks proposed by Nolen were an integral and defining element of the General Plan.  Streets were conceived as linear parks with planted medians fronting homes and extending “nature” into the center of the City.  Homes were designed to be no more than a block or two from a large park that provided common green space and playgrounds.  Certain parks were planned to provide field type activities, specifically Venezia and John Nolen Park, while other parks protected and provided communal access to natural features.  Integrated into this web of greenspaces were public facilities.

The City of Venice remains one of the most complete examples in the United States of a City Garden Era city plan.

Fast forward to today, the City of Venice has over 30 parks for the public to enjoy.

Here are some that may have an interest to you:

Here’s a list of all the parks in the City of Venice:

Whether you are thinking about moving to the City of Venice, live here seasonally or enjoy our beautiful city year round, please know that these incredible green spaces are available for all of us to enjoy in this gorgeous Florida weather!  I believe John Nolen would be happy & proud to call the City of Venice his home today.

Get your Instant Home Value…

Got a question? We are available …

Got a question about this property?

Oops! We could not locate your form.